Monarch of the Platinum Quadrangle 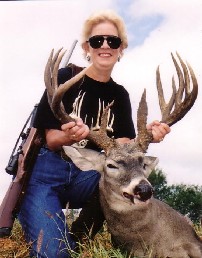 The buck she took this year is a prime example of native South Texas genetics from a region renowned for its great whitetails. Since the Indians inhabited this area and herds of roaming mustangs caused it to be named “The Wild Horse Desert”, it has been known for its prime deer hunting. The Covert Ranch is located within the 1.5 million acres which was first named the Golden Triangle in 1990. It is an area of the South Texas Plains lying within a triangle drawn from Laredo north to Cotulla, and west to Eagle Pass and back to Laredo. In fact, the Covert Ranch is located in an area within the Golden Triangle and is part of what I would now call “The Platinum Quadrangle”, which is 200,000 acres of native brush land bounded by Farm to Market Road 133 to the north, US Interstate Highway 35 to the east, Texas State Highway 44 to the south and US Highway 83 to the west. Among most knowledgeable people, this red sandy loam stretch of land is considered to be “the best of the best” for whitetail deer. And on top of that, the Covert Ranch is blessed with abundant subsurface water resources which have been developed to create a virtual oasis in this semi-arid environment. 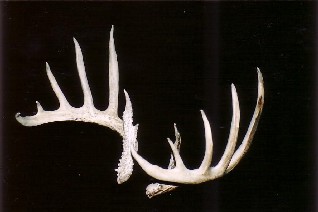 The story of this buck started when Dr. Charles Covert, a fourth generation Texas rancher, bought the 2,222-acre Covert Ranch in 1989 and began an intensive management program for enhancing the development of the existing native whitetail genetics. In 1989, the best buck on the ranch only scored 130. Diana’s most recent buck was first observed two years ago, during the 2003-04 season, as a promising 4-year-old 10-point 180-class buck. Then last year, while guiding another hunter, Dr. Covert saw this same buck come out of the brush. His hunter pointed to the buck and whispered that he wished it had been fully mature and in the class of bucks he was hunting.

Both the hunter and Dr. Covert aged the buck on the hoof as a 5-year-old then. Dr. Covert called Diana on his ranch 2-way radio to ask her to record the field judging measurements of the buck as he and his hunter jointly scored it. He was now a 13-pointer and as “Doc” whispered each of the measurements, Diana recorded them in her field notebook. She kept a copy of those scoring notes taken that day. The total estimated score was 195!

Later in the season, Diana videoed the same buck and decided to pass him up until the next year. It takes a lot of patience, not to mention willpower, maturity and integrity to pass a 195 buck, but that is an example of the calculated risks that good guides and managers have to take. Research shows that a buck has the potential to increase its number of Boone and Crockett points by an average of 6% from ages 5 to 6, depending on genetics, rainfall and habitat conditions. The buck could have added as much as 12 inches of horn between his 5th and 6th year if the ranch had had another in a series of three “wet” years as it had had in 2002, 2003 and 2004 with over 50 inches of annual rainfall. In Diana’s case, patience paid off and affirmed that psychiatrically speaking, adult fun involves accepting delayed gratification of long term goals.

In October, 2005, Diana started scouting at the Covert Ranch to prepare for her 17th season of guiding package hunters, not even expecting to get a glimpse of the great buck that early in the season. Luckily, the buck’s shed horns from his fifth year had been found and were rough scored over 180, even after a year of exposure to the elements and substantial shrinkage. Many thoughts had crossed her mind. Had the buck survived, had he moved to another area of the ranch, would he be injured or have broken any of his horns, or would he have gone underground and not be seen again? On Saturday, November 5th, she was alone in her blind, the only one scouting that evening, when he came out. The buck was in one of the several areas he had been seen before. His horns were better than last year and in perfect condition. Elated and relieved, she first called on her cell phone and then returned to ranch headquarters to excitedly tell everyone what she had seen.

Diana later talked with her guide, Dr. Covert, and they decided to try to take the buck as a 6 ½ year old, even though the weather, with only 20 inches of rainfall, had been relatively droughty and the buck may have continued to get better in his 7th year, especially if the ranch got good spring rains. But she would have to wait another week until she could start her hunt. The suspense was building. The next week, she finally got into her hunting gear, grabbed her rifle and went to her blind. She was worried about whether the heat would slow deer movement. It was November 11, 2005 and the temperature was 94 degrees--hardly your ideal deer hunting weather, but not that unusual for South Texas in mid-November. They settled in and tried to disregard their discomfort. But the deer blind was like a steaming sauna and the yellowjackets and stink bugs were aggressively on the prowl.

Dr. Covert was ready to capture the buck on video and to record Diana’s hunt. While it was quiet and unpleasantly warm, he began his video of Diana. The camera was rolling while Diana glassed the edges of the brush with her 12 x 63 Swarovski binoculars. The brilliant red cardinals and colorful green jays were darting among the mesquite trees and seemed to ignore the heat. Doc had momentarily exchanged his camera for his 15 x 60 Zeiss binoculars when suddenly, the trophy buck stepped tentatively out of the brush. All at once, the 94-degree weather was forgotten as the guide’s quiet affirmation signaled that this was indeed the buck they were hunting. The South Texas brush is thick and sometimes impenetrable and Diana did not want to take a chance that the buck would be lost or would break a horn. She took careful aim and fired one round from her custom 7mm-.08 rifle. For two hours afterwards, Diana and her guide tracked the buck and found that he had circled back to near where he had been shot and died. The massive dark horns, presumably blackened by a nearby prescribed brush burn, were intact and even more impressive than she had hoped.

This buck has already won First Place in the women’s division of the Cola Blanca Big Buck Contest headquarted in Laredo, the Los Cazadores Deer Contest in Pearsall, the Los Cuernos de Tejas Big Game Contest in Carrizo Springs, The El Monstruo del Monte Big Buck Contest in Dilley and he has won the Women’s Diamond Buck award of the Trophy Game Records of the World in Ingram. The Texas Big Game Awards competition is still open, but Diana’s buck is expected to be one of the highest scoring whitetail bucks taken in the State of Texas this past season. The buck will also be entered in the Texas Trophy Hunters Association Extravaganza competition this summer.

According to each contest’s rules, the buck had to be scored by one of its officially recognized scorers and according to the contests’ published rules. The buck’s Los Cazadores scoresheet, signed by Larry Weishuhn, shows a gross Boone and Crockett score of 195 4/8. The official scoresheet of the Cola Blanca Contest, signed by Robert Eads, shows a gross Boone and Crockett score of 195 6/8. The Trophy Game Records of the World Big Buck Contest official scoresheet, signed by Denny Vasquez, shows a grand total of 465.4 centimeters and an approximate rough gross Boone and Crockett conversion score of 201 7/8. Variety is the spice of life, isn’t it? Different scorers, methods and scoring systems yield different though comparable results. What no one can dispute, however is this is one heckuva 200-class buck!?

Interestingly, the buck’s age was confirmed at 6 ½ years old from a lower jaw bone tooth analysis using the forensic cementum annuli aging process, which was done by the Wildlife Analytical Laboratories. Their certificate of age reassured everyone that sound management decisions had been made at each step along the way.

Diana will keep hunting and hopefully, she’ll bring in other large bucks in the future that typify the best that puro South Texas genetics, with responsible, intensive deer management can produce without expedient shortcuts. We are lucky to celebrate her success this year with her!